Here is a list of tropical nitrogen fixing trees that you probably never heard of. Most of these are native to the Philippines or Southeast Asia, or spread around the tropics of the wold.
Local Filipino names are used first followed by the scientific name.

Disclaimer: Altho I have grown some of these trees or have seen them; I am not an expert on these trees and if any information is wrong please contact me so I can correct it. Also if you want extra information to be added to a tree then also please message me.
And if you know of otger lesser known nitrogen fixing trees you want added contact me too.

Another fast growing tree. The flowers are usually eaten as a vegetable, but some also eat the leaves and young seed pods too. The tree has a softwood so its not that good. But the tree can be easily coppiced for making sticks.

A small tree with beautiful flowers that look like orchids. Another name of the tree is “Orchid tree”. The leaves and flowers are edible and used in cooking. The tree also has medicinal properties.

All species of Albizia are nitrogen fixing, but as far as I know Albizia procera is definitely native to the Philippines. It grows fast and tall and may become invasive. It can grow practically anywhere and is a good tree for restoring damaged soils.

The Acacia is well known, but Acacia confusa is the only acacia that is native to the Philippines. Acacia confusa is often confused with Akasya (Samanea/Albizia saman) which is a completely different tree that also has nitrogen fixation.
Acacia confusa is a small to medium sized tree with beautiful yellow flowers. It can grow in many soils. The roots penetrate deep into the soil and go straight down. The bark and leaves of the tree can be used as a medicine for diarrhea. The tree is also harvested for the hallucinogenic DMT.

Not much is known about this tree, because it is nearly extinct from deforestation.  It grows in the rainforest and its timber is quite expensive.

A very fast growing tree with leaves that look like Mimosa. It considered in the top 100 of most invasive species, because it abundantly produces seeds.
Even tho it is invasive, it is a very useful tree. It is grown for paper, for fertilizer(green manure), and for firewood, and the young seed pods are edible.

A tree from the mimosoid clade. All parts of the tree have anti-bacterial properties and used to treat infections. The patterns of the leaves are really pretty and perfectly symmetrical.

Like most nitrogen fixing trees it is fast growing and grows in a wide range of soils.
The wood is used for support beams for housing, because it is resistant to insect attack.
The tree has been used for reforestation in disturbed rainforests.

This tree can handle mild cold to extreme heat and many types of environments and soils. It can even grow in salty soils; survive long droughts; and intense flooding!
Because of this resilient tree it is a perfect pioneer species of restoring and greening deserts and controlling soil erosion.  Unlike the roots of Acacia that grow straight down, the roots of Millettia grow horizontally and spread out.
The tree is also used for bio-oil production.

A beautiful tree with bright pink flowers. The leaves are used a tea and herbal medicine.
Lagerstroemia is often encountered as ornamental tree in resorts, in streets, or gardens.
Like most other nitrogen fixing trees it used for reforestation in damaged soils. The wood of the tree is sometimes also harvested.

A tree with many practical uses..
Historically this tree has been used to give shade to cacao trees, as cacao trees do not tolerate full sun. Hence its name “Mother of Cacao”. It also been used to shade coffee trees. The trees are planted as live fences around fruit tree orchards. It can be inter cropped to reduce fertilizers. And is used in reforestation.
The tree is also used as a rodenticide and pesticide.

Also known as Ironwood or Australian pine. Unlike most other nitrogen fixing trees that are from the bean family the Ahogo is actually not from the bean family at all.
This pretty tree is mainly used for ornamental purposes and bonsai, but it also produces and excellent firewood.

At first I did not include this one in the list, because this tree is more well known throughout the world, but on popular request it has been added.
As I have said before it is often mistaken with Acacia confusa which is a totally different tree.
Akasya is a large tree that is used for shading people, streets, and crops. The wood is used for construction, often support beams. The leaves and seed pods are medicinal.

That’s it pancit! I hope you find some use in learning about these interesting trees.
Thank you for reading.

Steph has been exploring and observing forests since he was a child in the Netherlands. From mushrooms and worms to trees and vines, he dedicates his life to understanding nature. He now applies this knowledge to Jihatsu Eco Farm.
PrevPrevious postChemically Ripened Bananas In The Supermarket Do Not Taste Good
Next postExperimenting With Outdoor Mushroom GrowingNext

Whats Up With White Food?

White rice, white bread, and white sugar are much more 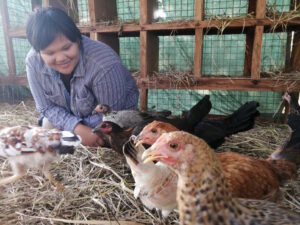