The Cycles And The Elements

All supreme knowledge is hidden in plain sight. It it is All right there in front of you.
You simply just need to see it. Observation is the ground of All knowledge.

The Grand Cosmos is governed by only 3 fundamental forces united by the fourth during 3+1 time periods.

*Force of creation and formation.

-Period of birth. (past)

*Force of preservation and conservation.

-Period of being. (present)

*Force of destruction and transformation.

All things that exist behave according to a cyclical nature from the microscopic to the macroscopic. (As above, so below). Many cycles exist within other cycles.
Common symbols associated with cyclical nature are the circle, the spiral, and the wave.

While many might associate negative things with the force or destruction, it is essentially a good thing.

The past is constantly being destroyed to make room for the new future. Meaning that nothing will last and everything is transient or impermanent. All things are constantly flowing and changing.

The only negative about this is that whatever good situation you have will go away eventually. The positive thing is that if you have bad situation, it too will change and go away.
If you accept the force of destruction and transformation as a natural part of your life and the universe as a whole then destruction becomes the ultimate source of creation and and great source of creativity.
Because to create the new you need to destroy the old first.

All things in the universe can be described with the 5 elements.

The 5 states of matter; the 5 cardinal directions; the 5 sense media

The symbol to show this is the five pointed star also known as a pentagram.
The pentagram outlines the human body with the head and body, the 2 arms, and the 2 legs.
Another sign of the 5 elements in the human body is the 5 fingers and the 5 toes.

In the human body the five elements manifest as such:
Bones, teeth, and hair belong to Earth element.
Blood, urine, saliva, brain sap and other juices belong to the Water element.
Inhaled and exhaled air and the oxygen, and the carbon dioxide in the body belongs to the Air element.
Body heat, the heart, muscles, and organs belong to the Fire element.
The mind and consciousness belongs to the Space element.

In sex the five elements are combined to create new life:

Knowledge can be found by observing and contemplating each of the elements. To know one element completely is to know them all. And to know them all is to know each one.
For all the elements are of one essence and essentially of the same nature.
Do not study, for the human intellect is completely useless. To study means to dissect and to dissect means to seperate. The more one studies the more one is separated and goes further away from knowledge. Studying is to destroy and break the object of knowledge, but what is destroyed by human intellect can not be put together again.
Human intellect breaks down knowledge into a fragmentation, conceptualized, fantasy world of categories and labels. Knowledge derived from human intellect
Simply observe. Leave it as it is. Do not break it apart, do not conceptualize.
Observing is non-violence and peaceful, it it is the doorway to enter into knowledge.

For man 9 holes in the human body

Here is a list of cycles from shorter to longer found in the universe:

There are many other places where cycles occur such as: the heartbeat, dancing, music, art, crafts, and sex.
When we tune into the cycles of nature our lives will naturally become more balanced and harmonious.

If you have being paying attention you will notice that the boundaries between the period of creation, the period of preservation, and the period of destruction overlap and merge into each other.  And that even if one tries to look for a clearly defined boundary between two periods, you can not find it. This is because essentially all three time periods and its three forces happen at exactly the same instant moment in the period of the timeless.

Know this to be certain:

All supreme knowledge is hidden in plain sight. It it is All right there in front of you.
You simply just need to see it. Observation is the ground of All knowledge.

Steph has been exploring and observing forests since he was a child in the Netherlands. From mushrooms and worms to trees and vines, he dedicates his life to understanding nature. He now applies this knowledge to Jihatsu Eco Farm.
PrevPrevious postWhat A Life (2020)
Next postThe Enchanted Forest (Fiction)Next

What Happens If A Dry Rice Field Is Never Harvested? – A Conversation With PhilRice

So I wondered to myself: “What happens if an upland 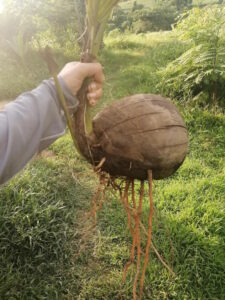 Why you should always plant seeds horizontally

I found the coconut in the picture in the forest