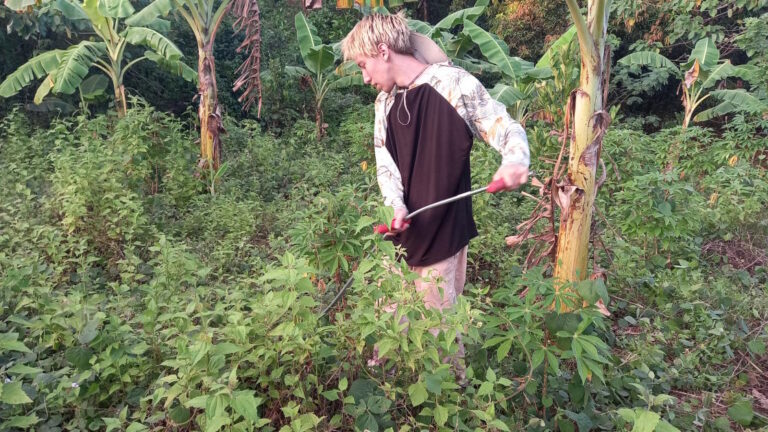 Disclaimer: These principles are called “guiding” because there are no rules in natural farming. There is no institute, no police, and no organization telling you what you can not and can do.
Depending on where you are in the world and your situation things can change and there are always exceptions. That’s why these principles are not dogma.

Masanobu encouraged people to observe their local ecosystems and ask “What does the land need?” Instead of projecting your desires onto the land. Based on observation one makes adjustments.
That being said there are certain natural laws in ecosystems which if broken will cause damage to the ecosystem and it is up to the farmer to deal with them. This remains the same throughout space and time, anywhere, anytime.
These principles are based on following ecosystem laws and should be able to be followed anywhere in the world.

1. No plowing, no tilling, no turning over the soil.

2. No chemical fertilizers and no (prepared) compost.

3. No weeding with herbicides nor with plowing or tilling.

4. No dependence on chemicals and no pesticides.

The five principles are all based on not plowing which is the root cause of farming practices…
By plowing soil fertility is lost, because of lost fertility fertilizers are added. Also because of plowing weeds quickly emerge, because of that herbicides are sprayed. And finally, because the ecosystem has become unbalanced pesticides are sprayed to control the insects causing even more damage.

These are four excellent guiding principles, but times have changed since Fukuoka wrote these principles in 1978 and they seem a bit outdated.
I wish here to expand them to make a more comprehensive list of “No-nos”. Masanobu always asked “What not to do” instead of what more to do, although he still wrote a lot on what to do.
The expanded list that follows below is based on the writings of Masanobu so it is not just something I made up.
After the list, I make a commentary for the reasoning of the additions.

1. No plowing, no tilling, no turning over the soil.

2. No fertilizers: no chemical, no organic, no compost, no compost tea.

3. No weeding by herbicides, giant machines, or plowing/tilling.
No weeding by burning. Or allowing space for weeds.

4. No chemicals or *cides of any kind: No herbicides, no insecticides, no pesticides, no molluscicides, no rodenticides, nematicides, no fungicides, and no other killer chemicals men will invent in the future.

6. No Genetically Modified Organisms (GMOs) this applies to all life forms from microorganisms, to insects, to animals, and plants.

8. No indoor high-tech farming such as hydroponics or greenhouses with artificial climate and light control.

9. No wasteful irrigation, no sprinklers.

10. No dependence on heavy machines such as tractors, bulldozers, or combine harvesters.

12. Not leaving the soil bare.

Here is a short commentary on each point:

1. Plowing is a lot of effort and destroys the ecosystem.

2. Adding chemical fertilizers destroys the ecosystem. Making compost is too much effort for too little benefit. Organic fertilizer is too expensive. Compost tea is also a lot of effort with not that many benefits.

3. Fukuoka did a lot weeding with a scythe, but he still allowed room for weeds and was not so much concerned with a few weeds.
This points out that one should not be overly obsessed by removing literally all weeds as they are still beneficial, at the same time one should still do weeding, but without damaging the ecosystem.

4. Whatever chemicals one uses to kill “unwanted” things on the farm will only cause more unwanted negative effects in the future.

Now we move on beyond the four main original principles.

5. In Japan rice farmers burned off their rice straw, because they were worried it contained rice pathogens that could affect the next rice crop.
Masanobu thought burning rice straw was a bad idea and proposed keeping the straw on the field.
From this, we can conclude he was against all forms of burning, except for cooking.
*There are certain areas in the world where small controlled fires prevent huge forests fires and in this area, small burns should be done.

6. Masanobu always took the view of least interference in nature and so naturally he disliked any form of GMOs. Whatever we do to improve nature will always hurt us in the end.

7. Masanobu always praised polycultures and disliked monocultures, because the former is not only more natural but also more resilient.

8. Masanobu specifically said high-tech indoor farming is bad as it creates weak plants, creates too much pollution, and separates humans from nature. In fact, he disliked any high-tech stuff.
However, there are greenhouses that do not use any artificial climate control nor artificial lighting. These kinds of greenhouses do not produce much pollution and are okay to use.

9. It is okay to (artificially) water plants and trees, but doing it too much and in a wasteful manner will do more bad than good in the long term. Soil erosion, salt buildup, and lazy weakened shallow root systems are symptoms of wasteful irrigation. Especially sprinklers are wasteful.
Drip irrigation seems to be the best and least wasteful method of irrigation.

10. Such heavy machines other than causing pollution and compacting the soil, raises the farmer off the soil causing the farmer no longer to walk on the earth with his feet separating the connection with the soil.
It is also incredibly expensive to buy and maintain, a farmer will be a slave to his machines instead of the other way around.

11.  Nothing good comes from overgrazing… Like machines, a farmer becomes a slave to his animals. Instead of the animals working for the farmer, it is the farmer who works for the animals. Masanobu called sheep locusts on four feet. Methods of rotational grazing and holistic grassland management are far better.

12. Leaving the soil bare not only makes it unproductive but also causes quick soil erosion. Like humans wear clothes to protect themselves, the soil needs something to cover itself. Masanobu never left his soils bare.

13. Once a tree is pruned it needs to keep being pruned for the rest of its life. If pruning is stopped after pruning then it causes disease and a shorter lifespan of the tree.
Therefore pruning is a lot of effort.
**However Masanobu would sometimes still prune his non-fruit trees to gather firewood, for building materials, or he would cut the entire tree down and use it as nurse logs; for growing mushrooms; or for construction.

14. I have not found any reference to plastic mulch by Masanobu, but if you have read through this list I am sure you will agree that Fukuoka would agree about not having plastic mulch because straw mulch is much better.

Now that we have a list of everything that should not be done, then what to do?
Here is an incomplete list of things that can be done on a natural farm.

6. Enjoying the farm and walking in the forest.

Steph has been exploring and observing forests since he was a child in the Netherlands. From mushrooms and worms to trees and vines, he dedicates his life to understanding nature. He now applies this knowledge to Jihatsu Eco Farm.
PrevPrevious postLook At This Mango Tree
Next postRescuing A Dog From StarvationNext

To make natural farming easier, here are my easy top

How To Plant Sweet Potato

Planting sweet potato is as easy as sticking a stem

Living A Countryside Life Is Epic

(Originally Written on March 2019) It has only been five