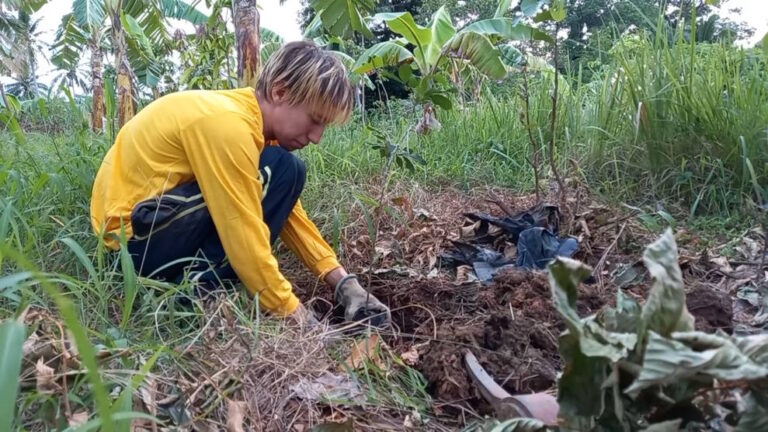 Over the past months of the year 2019, we have planted over 70 fruit and non-fruit trees on the land among which includes mango, avocado, rambutan(A tropical south-east Asian version of lychee), pomegranate, cacao (yay for chocolate! :D), lemon, lime, soursop, jackfruit (a non-stinky version of durian), mangosteen, persimmon, cashew, coconut, acacia,  neem, moringa, Pterocarpus and many more.

Nearly all these trees are only about 100 to 200 centimeters tall at the moment and will start bearing fruit in a minimum of 2 to 5 years, but it is a great investment. Some of them are only 10 centimeters in height. As these trees grow up and their canopy spreads then in 10 to 15 years our land will look like a dense forest with abundant food.

But we still have room for A LOT more trees. I estimate we can still plant at least 100 to 200 more trees on the land, maybe even 500 if we really want a super-dense forest that requires a machete to move through hahaha.
Some people might claim that trees need to be spaced far apart, that if you do not plant trees far apart they will die. Such people have never been in natural undisturbed/unspoiled forests.

I have seen several hundred trees growing in an area the size of a single bedroom, not only that but all these trees were also covered in vines and weeds so thick that you can not walk through it or even look through it; and yet these trees were producing plenty of seeds. As matter of fact, I have read several studies that showed that trees and plants grow faster when planted very close together, because of the competition to reach sunlight.]

I have heard from several different sources that a good forest will always need fresh young new trees growing in it alongside the older trees. This is so the older trees can be replaced by the younger trees in a continuous smooth way when the older trees die.

Or to say it simply. There should never be a gap or period in the forest where trees are not growing.
If such a gap in time happens there will also be a physical gap in space that opens up the forest floor to light causing weeds to be established preventing even more trees from growing well.

One of these species is Diptocarpus. Once the forest is cut down this tree will take a long long time to be able to regrow, because there is no longer any shading protection of other trees.
This makes sense because when a tree drops its seeds, the seeds will drop under the canopy and grow up under the canopy of the parent tree. Unless there are animals that take the seeds away to a different place.

Another reason is that when all trees in a forest are the same age they are more susceptible to diseases. When a disease spreads through a forest with trees all of the same age and possibly also of the same species the entire forest is soon wiped out.

There are several cases of where this happened in orchards or unnatural managed industrial forests where all trees planted were the same age and for decades nobody planted any new young trees alongside the older trees, or when seedlings started growing from the fallen seeds of the older trees these were quickly considered a ‘weed’ and cut down. The results have been catastrophic.

On my own farm, I will of course try to stay as close to the natural forest as possible. Maybe every few decades we can plant a few young trees to keep a wide range of ages in the tree population. And I will also keep trying to grow new trees from seeds whenever I can.

For my own amusement I have done a calculation:

Now imagine this tree being 85 years old, about 1 human lifespan. Thus it has been producing seeds every year for the past 70 years and that in those 70 years it has produced 70 children.
The oldest child will be 69 years old. The second child is 68 years old; then the third child is 66 years old; all the way down to a seedling that has just started growing.

Even if we are conservative and say this tree only produces seeds every 2 years, or that only 1 seed survives out of 2000 seeds produced in 2 years. It will reduce the amount of offspring, but still, in this scenario, there will be a lot of offspring with a wide range of ages.

Then consider 2 or 3 or even 50 of these old trees producing new offspring every year or every 2 to 10 years. That is the case of natural forests – altho of course, mathematical models are not exactly the same as nature. Trees can die anytime at 10, 30, or 50 years old from many different factors and so the real population will be lower than the mathematical model indicates.

Steph has been exploring and observing forests since he was a child in the Netherlands. From mushrooms and worms to trees and vines, he dedicates his life to understanding nature. He now applies this knowledge to Jihatsu Eco Farm.
PrevPrevious postTypical Struggles We Have from Living in an Isolated Home
Next postUltimate Beginners Guide to Natural FarmingNext 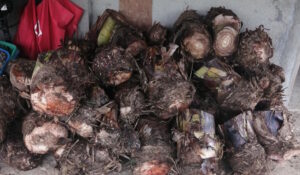 Every tropical natural farm I have read or learned about

Chemically Ripened Bananas In The Supermarket Do Not Taste Good