I have recently obtained several fully colonized fruiting bags of white oyster mushroom. However I do not have the space for growing them indoors and personally I do not like so much indoor mushroom growing, because of environmental reasons which I list below.
1. If you live in a cold climate you need to warm up the growing space which consumes energy.
2. The plastic bags use for indoor growing contribute to plastic pollution, but if they are recycled it is better of course.
3. Growing indoors requires the use of artificial lighting to replicate day and night cycle, these lights consume energy.
4. Sometimes valuable trees are cut down for wood loving mushrooms that grow on logs.

So for those reasons I want to grow natural mushrooms outdoors in so called mushroom patches using only locally available resources. At the moment I actually have rice straw and sawdust on my land which can be used. I want integrate the mushrooms into the ecosystem I have on the farm so that they can make the soil more fertile and increase biodiversity.
As of now I only have White Oyster spawn, but in the future I also want to grow the rice paddy straw mushroom (Volvariella volvacea) and the White Milky Mushroom (Calocybe indica), both tropical mushrooms suitable for my environment. If I can find other suitable mushrooms in the future I would like to grow those as well of course.

The biggest con about growing mushrooms outdoors is insects, contaminants, and seasonality. Growing outdoors means I can only have mushrooms in the rainy season, however I also like the concept of only eating foods in season so it is not a big con for me.
If I can produce a lot of mushrooms I might also want to sell them, either fresh, dried, or processed.  A disadvantage is that outdoor grown mushrooms have a shorter lifespan, but this can be compensated for by drying or processing the mushrooms. Some even say outdoor mushrooms taste better, tho if they are dried much of the taste will be lost.
The other cons are insects and contaminants. The latter one I hope to resolve simply by time. As the ”domesticated” mushrooms are released in the wild they will slowly become more resistant to contaminants with each new generation.
The last one: insects is the most difficult one as insects would love to feast on fresh mushrooms as soon as they can. The solution for this is simply to harvest the mushrooms before the insects have found them.

The location I want to use now for the first mushroom patch is a small pit that has been mixed with rice straw and sawdust. I will bury the White Oyster Mushroom spawn inside it. Around the pit I will construct a structure of bamboo poles and build a roof made out of dried coconut leaves to provide shading against the intense sun.
A future location for a second patch would be under a roof of living bean plans supported by a frame. The leaves of the vines will provide the shading for the mushrooms.
Another location would be underneath the shading canopy of trees.

I will update this post again as time goes on.

The mushrooms grew well indoors. I sprayed them twice or thrice a day with water.
And the mushrooms also grew well outdoors, with rain only. Here is how it went…

I had big amount of rice straw laying around and a big pile of fresh saw dust laying around from the construction of the house. The rice straw had been laying around for a month and was already slowly starting to rot, molds and wild mushrooms were already growing in it. I took a pile of the least rotten rice straw and soaked it for around 24 hours in a drum of water. In the meantime I placed the saw dust in the sun.
After this I drained the water from the rice straw and mixed it with the saw dust. As mentioned earlier in the post..  A small hut was build to shade the rice straw and saw dust mixture from the sun. The hut consisted of 4 bamboo poles with coconut leaves as roof. In the mixture I put in several bags of oyster mushroom spawn.
A week later the hut collapsed in a storm from the wind and the rain. I did not rebuild the hut, but 2 poles were still standing into which I re-arranged the coconut leaves to provide more shading which proved to be enough.

Steph has been exploring and observing forests since he was a child in the Netherlands. From mushrooms and worms to trees and vines, he dedicates his life to understanding nature. He now applies this knowledge to Jihatsu Eco Farm.
PrevPrevious post12 Nitrogen Fixing Trees You Never Heard Of
Next postExperimenting With Rice Part 1 – 2019Next 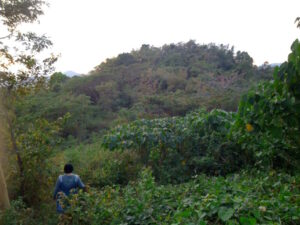 Typical Struggles We Have from Living in an Isolated Home

Our house is alone. There are no neighbors, no people,