Over the past years I have observed the sugar cane farming process in the Philippines and now I will share it with you in detail.
The entire sugar cane process from pre-planting to harvest takes about 1 year or 2 seasons. The rainy season plus the dry season.
The sugar cane process consists of the following steps: plowing, planting, fertilizing, weeding, burning, and harvesting,

First: The fields are plowed with the Carabao also known as the water buffalo. Usually in between harvest and planting animals graze the field and drop their manure. During plowing the manures are mixed with the soil.

Second: The sugar cane of the previous harvest is cut into cuttings. The cuttings are soaked in water for half a day to a full day. The easiest way to do the soaking is by placing the cuttings in bags and then placing them in a river, the bags are tied to trees if the current is too strong. Then the cuttings are planted in rows.

Fourth: the sugar cane grows tall and fattens(becomes thicker) during the rainy season.
The rainy season starts around June. During this time the main weed called Clitoria grows on the sugar cane. Clitoria is a leguminous nitrogen-fixing vine. Another weed that grows is Mimosa pudica (Another leguminous nitrogen-fixing plant, altho not a vine) which likes to grow in disturbed soils.
Other weeds that grow are grasses and various other weeds.
Once in a while, the farmers come to manually pluck out and cut the weeds between the sugar cane.
Other times farmers weed by plowing the rows between the sugar cane with a carabao.
Farmers also spray chemical herbicides for weed control.

Fifth: When the harvest approaches the sugar cane field is burned to remove all the weeds and leaves on the cane. The sugarcane itself is strong enough to resist the fires and is the only one left standing after the burning. Before the burning, some sugar can leaves are taken from the land as feed for cows and carabaos. When the fields are burned one can see smoke rising even from very far away and when nearby fields are being burned it will rain down ashes on a wide area for several hours.

Sixth: The sugar cane is cut down with the machete and loaded up into trucks which are then sent to the nearest sugar cane factory to be processed.
The harvest takes place from December till April. The exact date depends on the availability of workers and the size of the field to be harvested.
Our field was harvested at the beginning of March.
After the harvest, all the leftovers like the sugar cane leaves, weeds, and other scraps are burned away until the field is clean and the soil is bare.

Here is a quick overview of the sugar cane farming process in the Philippines:

One of the many sugar cane fields around us.

Is the sugar cane farming process in the Philippines sustainable?

One of our neighbors is an old woman. We asked her if she noticed lower yields in their harvests over the past decades. She said she did notice. The sugar cane in the past used to be a lot fatter. We asked her why. She said that one of the reasons is climate change and El Nino. In the dry season, it is too dry and in the rainy season it rains too much. Also, the dry season has been getting longer.
But she says the real reason is that farmers have not been plowing deep enough.
We also asked another neighbor who is a younger woman. She also said the same… that farmers are not plowing deep enough, because according to them the good soil comes from the deepest parts of the earth.

Other than climate change I totally disagree with the plowing. In fact, I believe one of the main reasons the sugar cane yields have been dropping is because of too much plowing and burning the fields. The soils of the farms here are badly damaged and look dead; the organic matter in the soils is very low.

The plowing of the fields contrary to popular believe actually compacts the soil more over the long term and reduces fertility. When the fields are plowed they are exposed to the sun and heat which kills most micro-organisms, especially fungi in the soil which are supposed to help the plants grow better. The deeper the farmers starts plowing the more topsoil becomes damaged and eroded. The area around here is looking like a semi-desert. There are almost no trees, some parts of the soil are extremely hard; while other parts of the soil are turned into sand which causes the wind to become dusty. It is only in the mountains in the distance where there are lush forests, but alas these are in danger too from the charcoal gatherers. Sometimes we see large smoke plumes coming from the forests, because of people burning trees for charcoal.

Burning the fields is even worse. Altho the charcoal and ashes provide some fertilizer, the intense heat from the burning burns most organic matter and kills most fungi and other micro-organisms in the soil. The plowing also causes severe soil erosion and nutrient run-off, especially on slopes.

If farmers would stop plowing; stop burning the fields; and use mulch and grow cover crops to protect the soil then even if there are long droughts the plants would still be able to grow well. Growing cover crops and mulching will cool down the soil and increase the moisture retention of the soil. Not only that, but the mulch will promote fungi to grow which in turn also increase the organic matter in the soil.

Our fields have been harvested without any burning. After the harvest, we went away to the city for a while to handle some things, but when we came back one of the neighbors told us that our land got burned “accidentally” by a few children playing with fire on our land.
When we checked the land nearly all of our land was burned and scorched black. We do not believe children could have “accidentally” made such a big fire and we think the burning has been intentional. We think it has been an act of revenge by some farmers we had a dispute with because we wanted to protect the trees on our land.

Thank you to my amazing hard-working and courageous wife who has translated for me everything the locals have said. 🙂

Steph has been exploring and observing forests since he was a child in the Netherlands. From mushrooms and worms to trees and vines, he dedicates his life to understanding nature. He now applies this knowledge to Jihatsu Eco Farm.
PrevPrevious postWhy you should always plant seeds horizontally
Next postThat Special Tree In Your LifeNext 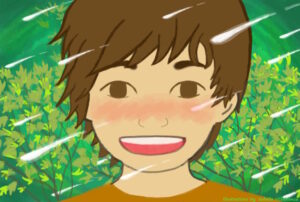 Making Our Own Water Filter

Sometimes you just got to be resourceful. When things break, 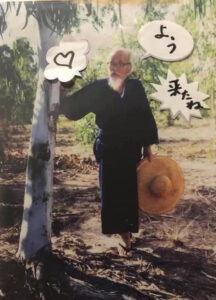